Adam Taylor, Washington Post, 21 May 2014) adds to Craig Whitlock’s May 21 Washington Post report to conclude that the U.S. military currently has “boots on the ground” in 13 African countries.  Here is an abstracted summary of their reports: 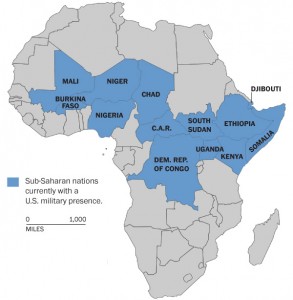 This count does not include U.S. military and intelligence personnel focused on Africa at the following bases and facilities (source: AFRICOM):